Your reputation precedes you

Certain positions in college football at certain programs carry an aura of greatness with them. Recently Southern Cal QB’s and Miami safeties come to mind. The men of “Linebacker U,” and “Quarterback U, ruled the 80’s, as did the great running backs for Southern Cal in the 60’s. However, there are also programs with a position that always seems to produce Saturday stars, that fail to transition to successful professionals. At times, this can develop into stigma for the school, one that gives draft gurus and GM's cold feet come April.

Penn State – RB’s: In 1987 D.J. Dozier was selected 14th by the Vikings. Starring in baseball as well, Dozier could not handle big league pitching, as evidenced by his career average south of the Mendoza line. Dozier did little on the gridiron as well and began a string a disappointing Nittany Lion backs. Drafted #2 in the 1990 Draft Blair Thomas only managed 5 TD's in 4 seasons. The legacy was solidified when Ki-Jana Carter went #1 in 1995 and immediately tore his ACL, effectively ending his career. Again in 1998 Penn State had a star back go early when Curtis Enis went #5 to the Bears. Enis was out of the league in 3 years after 4 touchdowns. With one exception of late, Larry Johnson and 3 time Pro Bowler Curt Warner of yesteryear, perhaps the PSU stigma is more coincidence than reality. 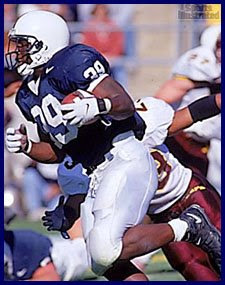 Florida – WR’s: Once the 1996 Sugar Bowl legitimized Spurrier's Fun-n-Gun, the Gator wide receivers started filling up the NFL in bunches. The success of the group is mixed, as one can see: In 1997, Ike Hilliard went 7th and Reidel Anthony was taken 16th. Ike's 27 touchdowns over 7 years for the Giants is under top ten value, and Reidel was largely quiet in only 5 seasons. The next year Jacquez Green went 34th and managed a 7 touchdown career. In 2000 Travis Taylor was drafted 10th by the Ravens and was released in year four. Taylor has been able to resurrect his career, but the damage is done. A string of players who ran up accolades and numbers failed to transition to similar NFL glory. Since Taylor, Florida WR's have improved. Drafted 70 picks later in 2000, Darrel Jackson has been a star for the Seahawks. In 2002 Jabar Gaffney went 33rd and Reche Caldwell went 48th, each has had moderate success. More recently, Chad Jackson has been an injury disappointment after going 36th in 2006 and Dallas Baker and Kelvin Kight remain on the fringes of the league. In the most recent draft, Andre Caldwell went to the Bengals at 97th. His low valuation is hard to gauge due to his injury history, but a more telling Gator will be Percy Harvin next year.


FSU – D Line/ LBs: Ever since Mickey Andrews started turning them loose in his attack D, FSU has produced numerous All-Americans. The no read, just attack scheme produces big plays for these college stars, but sometimes leaves them one-dimensional in the League. FSU has produced some Pro Bowlers, but a few duds as well. Jamal Reynolds won the Lombardi and was picked 10th, in 1991, only to be released 3 years later. In 1995 Derrick Alexander was taken 11th but only played 5 nondescript years before retiring. In 1997 LB Reinard Wilson was taken 14th by the Bengals and managed a decent career for 7 seasons, but never dominated after his All-American senior year. Andre Wadsworth was taken 3rd in 1998 but managed only 8 sacks before bad knees led to him being released by the Cardinals in 2000. Corey Simon was picked 6th in 2000 after a big college career. Initially he had a few good years for the Eagles, and a great 2005 for the Colts, but is now retired. (On the bubble: Broderick Bunkley, drafted 14th in 2006, had a poor rookie season and good sophomore year. Kamerion Wimbley, picked 13th in 2006, good start, lackluster season season.(Exceptions: Derrick Brooks, Peter Boulware, Marvin Jones, Ernie Sims, Darnell Dockett in 2004 might have been a victim to this up and down Seminole defensive success in the NFL. Dockett lasted until the 3rd round despite setting an FSU for career tackles for losses. Earning a trip to the Pro Bowl in 2007 gave some credence to Dockett's being undervalued. 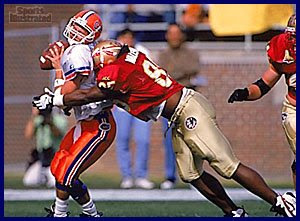 Spurrier’s penchant for making WR’s play above themselves is even more apparent when one considers his two Gamecock underachievers in Troy Williamson and Sidney Rice. Williamson has consistently underachieved considerading his 7th pick status. One wonder whether this had any influence on Sidney Rice’s being taken 44th. Rice had much better college statistics than Williamson, and is three inches taller.

Tedford Qb’s – From Fresno State to Oregon, and at his current post at Cal, Tedford has consistently churned out top QB’s. Tedford tutored Dilfer at Fresno State, much maligned as the “average” guy; Dilfer has a shiny Super Bowl ring to quiet most haters. Harrington was drafted into a difficult situation in Detroit, and despite attempts to get him WR’s he never really had a chance. Being drafted 3rd ended up being an onus for Joey as the Lion’s patience eventually waned. The next year Tedford went to Cal and coached up an otherwise erratic Kyle Boller into a first rounder. Boller was drafted 19th, and over the next few years disappointed Ravens fans time and time again. The bias against Tedford QB’s became glaringly obvious in 2005 as Aaron Rogers sat through 23 picks, after having hopes on the top 10. Rogers has his chance this season to prove the trend wrong, unless Favre pulls a Pat Healy on A-Rog.

That should have been the Harvin video. "Percy shows no Mercy"