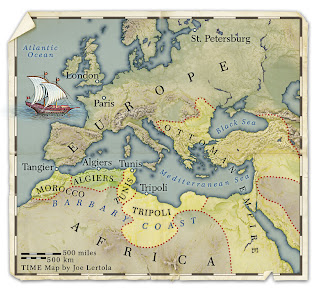 At the dawn of the 19th century, a young and growing United States was quickly becoming a leader in transatlantic shipping. Southern plantations churned out tobacco, cotton and sugar thanks to ample land, and a burgeoning slave trade. Before asserting its independence from the Crown, these exports sailed under the watchful eye of the British Navy. Now alone, yet undaunted, U.S. ships took the treacherous voyages at the mercy of the high seas. As the trade routes reached the Mediterranean, American ships came under attack from the Barbary pirates. Left over from the Crusades, the Barbary pirates were a feared navy of Muslims that called the shores of North Africa home. Attacking all Christian ships, the pirates soon made life miserable for 3rd President Thomas Jefferson. In July of 1803, Jefferson, fed up with mounting losses, ordered the U.S.S. Philadelphia to restore order in the Mediterranean. Initially successful in recapturing an American vessel, the Philadelphia soon ran aground off the coast of Tripoli and was surrendered. Not wanting the spoils of war to be used against them, Lieutenant Stephen Decatur, Jr., led a group of men to the grounded ship and set it afire in the Tripoli Harbor. Occurring in 1806, the loss of the Philadelphia was only the end of the first act. The Second Barbary War lasted until 1815, when at last American ships could safely travel the southern Atlantic shores at the mouth of the Straight of Gibraltar. Free of piracy and tribute payments, the American agrarian export economy flourished until cotton was no longer king. 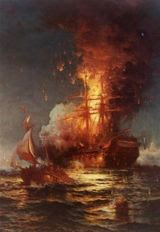 U.S.S. Philadelphia afire off the coast of Tripoli
at 12:02 AM

Our publishing team "Les Editions du Cherche Midi" (France) is currently working on a book project entitled "L'Europe à la carte", with J-C Bas as its author. We are interested by the reproduction of the illustration quoted with the following reference :

The book will be composed of 50 pictures and illustrations which will be commented upon by international key figures who will share their vision of Europe.

We would be very grateful if you could advise us on how to get the illustrations with a resolution of 300 dpi in a 21X29,7 size, jpeg format, with a view to publish them. The final work will be published to a number of 3000 copies in both French and English languages.

We would like to stress the fact that we are runing short on time, and would be very pleased to get an answer as soon as possible.

We thank you in advance for giving us particular details on how you could produce the illustrations (Ftp server, Cd or mail to our studio), how the copyright applies, and what the copyright conditions are.

I am available in case you would need any further information.