Next time you're on I-95 in South Florida notice the amount of Kentucky license plates in your midst. Certainly Florida is popular tourist destination which would explain some of the Kentuckians, but many are here for OxyContin. The oral form of Oxycodone, OxyContin was approved by the FDA in 1995 and on the market the next year. By 2001 it was the highest selling pain killer. As the pill form proliferated, abuse began to take place. OxyContin is a synthetic opiate, meaning it is from the same family as codeine, heroin, and morphine. Oxys are now the preferred drug of choice for opiate seekers. Why do people come to Florida to get their Oxys? Because only in South Florida can you find "doctors" who will prescribe obscene doses of pain killers without any examination, medical records, or x-rays. Florida does not have a statewide database or monitoring system so unscrupulous doctors have found their cash cow. 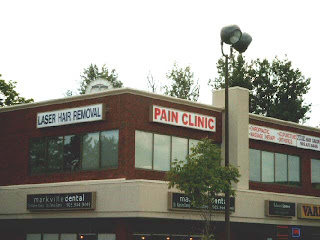 These "pill mills" are most often found in strip malls in Broward and Dade counties. Hastily put together offices often have long lines of pill heads, security detail to deter robbers, and take cash only. The doctors writes a prescription for whatever is ordered and provides an accomplice pharmacy to carry out the scheme. Thousands flock to Florida to doctor shop because of the lax practices. A scary fact? According to Florida Representative Kelly Skidmore, "of the top 50 dispensing physicians of Oxycodone in the entire country, all 50 are in Florida." 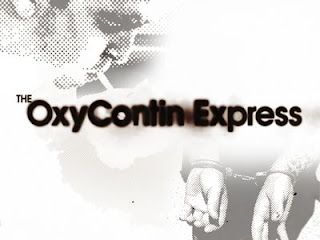 This fall Vanguard aired the documentary "The OxyContin Express," which highlighted the growing problem. In the film journalist Mariana van Zeller tracks an addict, takes a ride on the OxyContin Express, and follows the cops in a bust. The OxyContin Express documentary got its name from the OxyContin Express plane trip from Huntington, West Virginia to Ft. Lauderdale. The Huntington airport is the closest airport for many in Kentucky, Ohio and West Virginia. The narco-tourist can traffic their drugs back home in carry-on without a care in the world. The documentary highlights the problem law enforcement faces. Since the prescriptions are legal on paper, the cops can only bust the addicts selling off parts of their supply to stay solvent. Their effort is fruitless since according to Wikipedia, "The International Narcotics Control Board estimates that 11.5 tons of oxycodone were manufactured worldwide in 1998, which grew to 75.2 tons in 2007." With doctors dispensing thousands of pills a day across South Florida the epidemic will grow unchecked until the doctors and pharmacists are targeted by law enforcement. Compared to the other hopeless battles against marijuana and cocaine, this is a war on drugs that can be won. Shut down the supply by closing the pill mills, and stripping the doctor's of their licenses. Implement a statewide monitoring system tracking the doctors and patients. Without shady doctors the OxyContin Express has no destination.
at 8:00 AM

OxyContin is legal heroin and by allowing the easy distribution of this drug, Florida is allowing the addictions and deaths of thousands. We need to stop the pill mills and the doctors who pass these drugs out like aspirin.