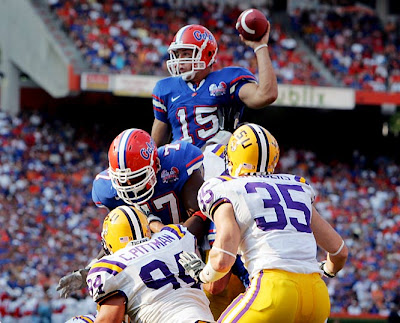 Schadenfreude is a Germanic word that describes the feeling of satisfaction one receives at witnessing the misfortune of others. Despite its roots from a people that consider football to be a no-hands game, Schadenfreude has strong basis in college football. The underdog has been an American rooting favorite since Upset took down Man o War in ye olde times. College football fans not only follow suit and often pull for the underdog in a neutral game, but more fervently cheer against the successes of their most hated rivals. With the advent of ESPN, the 24 hour hype machine, fans often find themselves saturated with coverage of the best teams. A few years ago you could watch ESPN, not just SportsCenter, but PTI, Cold Pizza, Around the Horn, and catch a USC Trojans story every 15 minutes. Matt Leinart and Reggie Bush highlights and glowing reports on Pete Carrol dominated the airtime. Lately it has been the Florida Gators, starting with the live coverage of the 2007 Spring Game and ending last night. Tim Tebow has emerged as the biggest story in college football in years and commands boatloads of attention from the talking heads in Bristol. It's hard to imagine a Tennessee, Georgia, or Florida State fan not resenting The Network and their colleagues on CBS for developing an obsession with Tim Tebow.

Last night's loss was stunning, not because the Gators were upset by an inferior team. In all facets of the game Bama took control from the opening whistle. The loss was stunning because the Gators and Tebow had been lifted to a mythical status and certainly couldn't get their asses handed to them. Well they did, and certain corners of the college football world rejoiced at the end of an era. Tebow's tears only raised the level of Schadenfreude, not only in Tuscaloosa, but Knoxville, Athens, Tallahassee, Norman and elsewhere. The rest of us hope for a measure of parity on the national scene for a few years to avoid the disturbing trend of ESPN appearing to sponsor the reigning college football dynasty program. 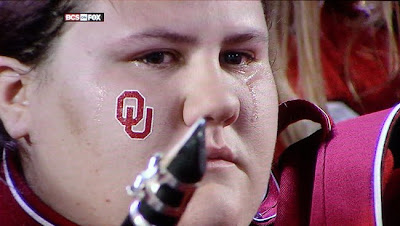 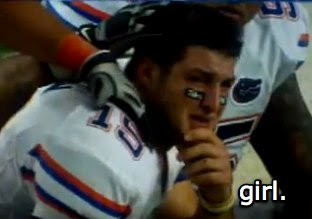 Wonder how many of these are being made today?
at 12:11 PM