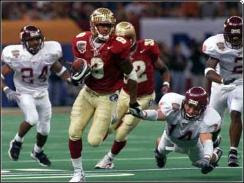 In recent college football history, a handful of offensive players can be described as having been truly "electric." In 1998 and '99, Peter Warrick was a homerun threat, that Mark Richt ingeniously figured out ways to get the ball to. Whether it was direct snaps, reverses, or bombs from Weinke, Peter Warrick was nearly unstoppable. Selected 4th by the Bengals in 2000, Warrick never found success in the NFL. Gone was the burst, sharp cuts and electricity. 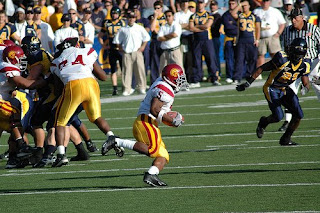 The next player to dazzle like Peter Warrick was Reggie Bush. For two seasons, Bush ran around, behind, and past defenses with lightening quickness. Just like Warrick, once in open space, Bush was impossible to corral. However, Bush has met the same troubles in the NFL as Warrick. Unable to get loose, Bush has been a disappointment thus far for the Saints. Moments of brilliance overshadowed the early slow returns, but 581 yards rushing in 2008 was a wake up call. Why is it that two of the more brilliant college football players in the last decade have been unable to transition to the NFL? Certainly defensive speed is an issue, is the speed differential just enough to close those tiny gaps these speedsters used to squeeze through? Countless highlights show Warrick and Bush creating a sliver of daylight with a hip waggle and head fake. NFL linebackers are presumably better fundamentally than college ones, coached to watch the belt. The moves that once produced awe, now produce losses behind the line of scrimmage.

Of course there are others that deserve this label of "electric." Devin Hester's proficiency for big plays has made him the most feared returner in the league. How come Hester's speed, moves and fakes translate to the NFL, but Warrick's and Bush's does not? Hester has the luxury of open space when he gets the ball in punt returns, and not coincidentally, punt returns were the one bright spot in Warrick's NFL career. Where does this collegiate electricity go? Like a fire that gets snuffed out without air, these playmakers suffocate in the claustrophobic field of NFL play.
at 12:03 AM

Rule #1 about Peter Warrick references: Never pass up an opportunity to make a "Dillard's" joke.