One of the most crucial issues facing our country is consumption. Every day we are reminded that our environment cannot sustain our rapid growth and bad habits. Despite the unfortunate politicization of global warming/climate change, few can argue that "going green" isn't in our best interest. However, at times it seems like the tone of the environmental movement has been misguided. People have been scared into thinking "going green" is a new type of lifestyle; hybrid cars, organic food, and yoga. Those over the age of 40 feel left behind already by the internet, add environmental consciousness to the mix and you have a generation gap the size of polar ice caps. For starters, much of what we need to change doesn't involve doing new things at all, but rather a return to our past. The generation of Americans that grew up in the shadow of the Depression, and ultimately became The Greatest Generation, actually knew a thing or two about conservation. They grew up hearing a litany of reminders from their mothers, "turn off the lights when you leave the room, turn off the water when you brush your teeth, only 1 hour of T.V. time per day, only take what you need." This type of Ward Cleaver conscientiousness will go a lot further towards reducing our global footprint that the latest eco-fad. The hipness of "going green" is part of the problem, often trends begin with great enthusiasm, and all too often falter under the weight of their own failed expectations. In today's instant gratification society, it is easy to see a moment in the near future when environmentalism loses it cachet. This is by no means an attempt to trivialize or minimize the significance and importance of changing our national habits, but merely an attempt to understand why so many talk the the talk, but so few walk the walk. 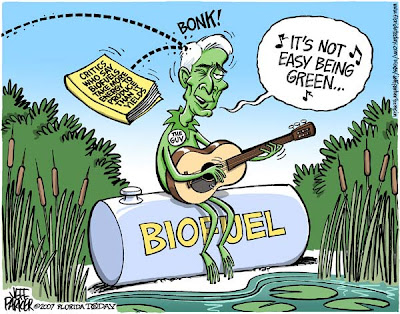 A major problem for the broad based environmental movement is the apparent outstanding issues in alternative energy. The rush to ethanol as a national panacea has faded in the dim reality of cost. Simply put, it is not creating an energy profit. As Mr. Wall Street Fighter succintly states, " It take 7.3 pounds of soybean oil to make 1 gallon of ethanol. And it's how much per pound, 63 cents? Add in processing cost..." Adding to the problem is the question of what happens when you use all your food to make fuel? Our national attention span will not tolerate failures. However, it would be a tremendous mistake to discount the viability of biofuels. Brazil has shown the world that sugarcane can power a large nation, but their success did not come overnight. It took the better part of a decade, a luxury our procrastination no longer affords us. With gas prices rising, along with practically everything else, the urgency is palpable. But another Cleaverism proves telling again, "haste makes waste." In our hurry to become self sustainable we might have taken a wrong turn. We must not let "going green" become a fading fad, but rather we must instill those Depression era fears in our youth. Sometimes the fear of losing it all brings out the best in people.
at 1:02 AM